MEET THE FOUNDER
Beside a great woman 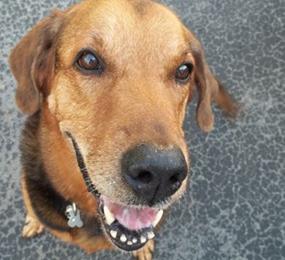 “I have a tendency
to like to run with the ‘big dogs’”,
muses Quoteagious Founder & CEO Michelle Melanson,“ …literally.”
…sometimes stands
a great man

Meet James.  Tall, dark and handsome, he is THIS woman’s best friend.

“A stray off the streets, it was the SPCA that found him,” Michelle begins.  “And when I took a trip there after losing my former best pal of 12 years, an equally handsome and not so small yellow lab-retriever mix, it was James who found me,” she offers fondly.

Recounting her good fortune, she admits, “Proof that I DO believe in ‘love at first sight’ – - from the moment our eyes locked, I knew he was mine …and I was his.”

This openly admitted dog-lover explains more, “After losing my best pal of 12 years, who had been with me throughout EVERYTHING – - crazy college life, heartbreaks, family losses, career transitions, relocations, cross-country adventures, and other miscellaneous excursions and journeys through life – - to say I was devastated was an understatement.  I had already lost my dad, I was not yet married (and am still not), and Mason had been, as I referred to him, ‘the most dependable man in my life’. Consistently throughout our relationship together and through those formidable years of my early adulthood, he was always there – - my most loyal companion, surviving all other relationships which had come to pass.”

“And then,” she sadly reflects,” Mason was gone.”

She continues, “It all happened in one day, without more warning than that.  I woke up one morning and Mason was not quite right.  After taking him to his vet and spending the afternoon there, with only a bad news prognosis the result, I took him home that evening on a stretcher. I spent his last few hours with him, right by his side.  And before that night became a new day, he had passed, “Michelle shares with sorrow.

“As I grieved his loss, I tried to figure a way I could make something good out of something that hurt so bad,” she recalls.  “Mason had been a great friend.  And fortunately I was able to be with him until the end.  I had considered that through all of our adventures together, I was lucky to have not ‘lost’ him before – - due to his own adventurous side that sometimes provoked him to stray from home or wherever substituted as home at the time.”

Michelle acknowledges, “I considered that had we ever gotten separated, as sometimes happens between owners and their pets, even when they share a strong beloved bond of love, I would have wanted him to have found a safe home where he was equally loved, had we not been able to find each other and reconnect.”

She continues, “Unfortunately, I knew  that would unlikely have been the case – - as many adult strays don’t find homes because adopting families prefer puppies to their adult alternatives – - often assuming the older models have  been ‘returned’ or ‘rejected’ because of something wrong with the dog.  More often in the cases where a dog has been surrendered, there is something wrong with the owner,” Michelle insightfully adds.

Michelle divulges,” I decided that the best way for me to make something good out of my loss was to sign-up at the local animal shelter as an optional adoptive caretaker for an adult dog they might have trouble placing elsewhere.  Just as Mason could have made a family a wonderful pet, I thought perhaps I could do the same in return for someone else’s unintended loss.”

She further reflects,” Upon visiting the shelter to sign up, they encouraged me to take a look around, including a visit down ‘adoption row’, despite that I had no intention of making an adoption that day.  They had poodles to pitbulls, chiwawas to chows – - nice animals but none that were for me.  I was on my last row of pens, and on my way back out of the row, when my attention was directed to a cage I had passed on my way in but somehow had overlooked.  I thought I had passed it being empty, but there was no way I could have missed the large creature inside,” she revisits.

“Inside this very last pen lay this large but emaciated hound.  As I peered in, he slowly raised his big heavy head to look up at me.”  She continues, “And when our eyes met, it was as if we recognized one another, as long lost friends.”

“As I opened the top part of the divided door, to get a closer look at him, despite his weak and weary frame, he managed to get his large body up from the floor.  He proceeded to slowly make his way toward me, and upon reaching the door that separated us, he unexpectedly jumped up, saddling the ledge of it with his elbow, seemingly waiting for a bartender to slide him a cold frosty mug from down an invisible bar, as we stood eye to eye.  Despite his poor condition, and his obvious hardships, I could clearly see that this guy had personality. And lots of it.”

“If that wasn’t enough… that was when he grinned,” Michelle radiates with a foretelling smirk of her own.  “Animal lovers know what I mean here – - not only can you see when your animal is happy but you can distinguish the facial expressions, just like we do with people.  And when this fellow grinned at me, revealing his crooked, worn down teeth, a result of being on the street far too long and eating through cans and other garbage for survival, he also revealed his character.  He was a survivor – - like me, and still hopeful, and still with love to give.  And that’s when I was certain that I recognized him in return – - a companion who would come to belong to me, and who I would come to belong to with equal affection and reciprocation.”

Michelle tells, “While there, I learned of Kaitlyn, a daughter of one of the volunteers, who accompanied her mom to the shelter.  Kaitlyn helped out at the shelter too – - as a junior volunteer.  Kaitlyn’s very important job was simply but significantly – - to love the animals.  And she indeed had been perfectly selected for the task”.

“I had the good opportunity to meet Kaitlyn – - the honor being all mine, “Michelle expounds.  “She shared with me her personal fondness for this charming fellow I was about to bring home and confirmed that he had been easy to love  – - despite that he up-sized her, making him like a giant teddy bear to hug.”

“She also shared with me her concern that because James was so big, she and the staff had feared that it was unlikely a family with small children would want him.  She also feared he faced the challenge of losing the consideration of those with a small apartment – - or even a medium-sized one.  Although she was young, she understood and  explained to me that although he was now in a safe place where he was being fed, had a warm place to sleep, and was out of the elements, an animal that can’t find a home also couldn’t stay there forever.”

“Therefore, she was very glad to see that he had found a placement with me.  As was I,” Michelle confirms.

“There was no question at that point- – except what to name him – - for as a stray, the shelter had no record of his name,” this adoptive parent reveals.

“Upon meeting this character-rich canine in his pen, I had observed the post for him which noted his temporary and unusually human shelter name – - yes, ’James’.”

“I additionally learned that Kaitlyn, an obviously in-tune and perceptive animal lover, had also been tasked the opportunity to temporarily assign those animals without record of name, a substitute one until their new adoptive owners made their own selection.”

“When I curiously asked Kaitlyn why she had selected the specific uniquely human name for my new friend, she confidently responded without hesitation that it was ‘because he clearly appeared to be a James.”

Michelle beams, “And she was right.”

“And so I warmly adopted James – - both the animal and the name,” Michelle confirms contentedly.

”And James has warmly adopted me in return.”

Grateful for the relationships she has shared with her four-legged friends, it is easy to see why the Themes of “Dogs” and “Cats” rank high on Michelle’s list of initial Themes.  And because of her appreciation for the relationship she now has with the current ‘most dependable man’ in her life, and her gratitude for the services the organization provides to both man and man’s best friend, Quoteagious is incredibly glad to offer these Themes as GIVE BACK types, with a percentage of proceeds being donated to the SPCA, Society for the Prevention of Cruelty to Animals.

Should you have an interest in sponsoring content from either of these lovable Themes, <instructions here> .  You can also elect to make your sponsorship a DEDICATION, which allows you to pay tribute to someone special – - with 2 or 4 legs.

When you sponsor GIVE BACK content, in addition to receiving recognition on the sponsored Product pages for making that content possible, and a link via your name to your own “About Our Sponsor” personal page, which includes your photo, a write-up and a message from you, you ALSO are credited upon Quoteagious’ donation to this organization – - so they know who helped make our contribution possible.

Should you prefer to celebrate our wonderful four-legged friends with a product purchase to enjoy yourself or give to a human friend, you can still support our current initiative to Kickstart this Content and our company by pledging to receive a download certificate good for any Theme choice, and at a specially reduced introduction price.  However, should you have the means to offer more generosity, there are plenty of great options that support our venture while supporting your interest in our content.

Not surprisingly, Quoteagious Founder & CEO Michelle Melanson is not just a Good Samaritan when it comes to people, but when it comes to Earth’s other creatures too.  Her friends and family have many a story of Michelle’s rescues and undoubtedly know who to call first should they come across a lost puppy, an aimless turtle, or car-struck opossum.  Whether she’s in her own neighborhood or yours, Michelle can’t pass by a puppy who looks like it’s lost its home, and as a result, she has successfully returned many pets to their rightful owners.